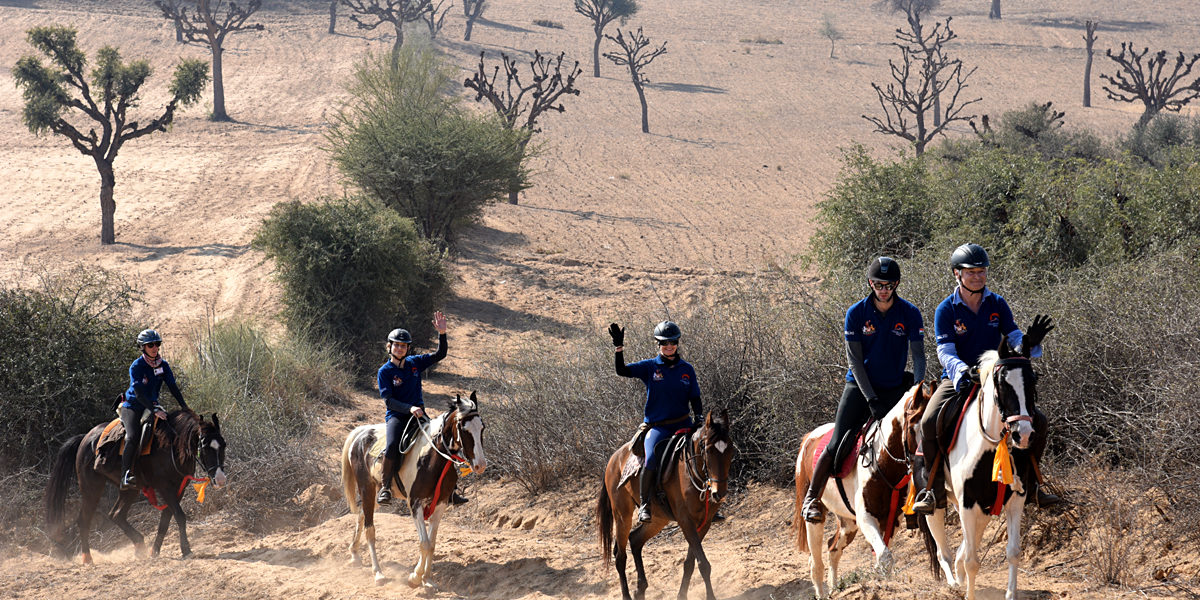 As many as 70 riders from 14 different nations from across the globe gathered together to share their common love and passion of horse riding. The third edition of a one of its kind event – ‘Gallops’ – was held for the first time in India from 2 to 9 March. The endurance ride, which began from the Shekhawati town of Mandawa, witnessed the participation of professional as well as amateur riders across ages and backgrounds – the cavalry members of India and Oman, Former Miss France as well as the 93 year old French man Philippe Perrier.

Sharing her experience of riding through the small towns of Shekhawati, Former Miss France Camille Cerf said that it is a fascinating and colourful experience to ride in the living desert of Rajasthan. The terrain is diverse and one gets to witness a variety of fauna on the way. Meeting the people of rural areas is also an enriching element to the whole ride.

An important feature of the Gallops of India is the promotion of the Marwari Horses – the indigenous breed of Rajasthan. Telling more about these horses, co-organizer of the event, Mr. Angad Deo Mandawa said that Marwari horses are hot blooded and are known for their aggression and speed. Therefore, they are ideal for this exemplary competitive endurance ride.

Further elaborating on the passion for horses, the oldest rider of the lot – the 93 year old Philippe Perrier from France said that the experience of participating in the Gallops of India is quite different from the earlier editions of Oman and Morocco. The prime reason for this are the Marwari horses. These horses are more intelligent than any other breed in the world, added Perrier. He also emphasized on the need for treating horses with utmost care and love and not think of them as a mere medium of transport.

It is noteworthy that the participants have been riding for 6 hours per day covering a distance of 40 kms. In between they halt for a 30 minute lunch break and at night they stay in camps where folk music and dance is organized.  The over 200 km ride  began from Mandawa and covered Alsisar, Mahendar, Bika Ki Dhani and Fatehpur and concluded at Mandawa.

26 YO Shivangi Sarda is the youngest female from Rajasthan to complete Ironman Triathlon 70.3
March 9, 2019

Storytelling through photographs & films at this workshop at JKK
March 9, 2019

Students of Umang meet Salman Khan during his Dabangg 3 Shoot in Jaipur
March 9, 2019

Giving flight to imagination with a Visual Stories workshop at JKK
March 9, 2019