Jaipur Diary – 2 : Reflecting Pink City As It Is 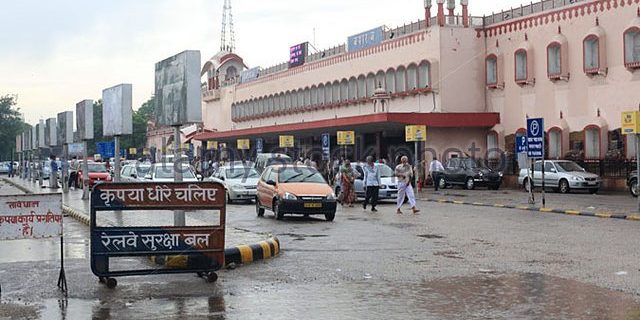 WHERE IS THE HUMOUR DAMNIT ?!

One doesn’t really associate the ‘Khakhi’ with wit and humour. So the Jasprit Bumrah traffic hoarding came as a pleasant surprise. It also received numerous ‘likes’ and re- tweets. The Jaipur traffic cops were happy. Indeed full marks to the social media agency/ cell of the Jaipur traffic cops for having created this creative visual and caption.

And then came the Bumrah tweet — “@traffic_jpr well done Jaipur traffic police this shows how much respect you get after giving your best for the country”. And in tearing hurry the tweets and hoarding were removed. There was no reason to. Instead Bumrah should have appreciated the wit and humour.  Not surprising that the late writer Khushwant Singh always said – Indians can’t laugh at themselves.

The incontrovertible fact also remains that Bumrah – whether he likes it or not – will have to live for the rest of his life with that albatross of that ‘no ball’ hanging around his neck. As Chetan Sharma does with the attempted yorker becoming a full toss and being whammed for a six!

A match between India and Pakistan is not just a game of cricket. It’s more! And everyone knows that. If you have a morning train to catch from Jaipur – you might miss it. The traffic snarl around the entry to the railway station between 5 am to 6 am is not funny! With as many as 10 trains leaving during this morning hour there is a huge rush to reach the station. Only a few days ago when this columnist went to catch the Double Decker to Delhi he barely managed to catch the train. He had to get off at the roundabout from the Uber and run towards the station.

The cops and the railway authorities are pretty efficient in ensuring that no car / taxis stops more than 30 seconds to disembark a passenger. Will they show some efficiency in managing the early morning traffic snarl as well. Godspeed!

FEEDBACK ON SHORTAGE OF WATER Meanwhile we have received a feedback from one Mr. Japvir Singh Vohra, who rues the fact that there is perennial shortage of water in some parts of Jaipur like Sodala and Ramnagar, where he stays. People are forced to buy water from vendors. However, earlier when he stayed in the nearby Shyam Nagar there was no such problem. He is also wondering if there is a covert water lobby that diverts Muncipal water to middlemen who make it a business to sell to households nearby? The General Manager of the Hotel Marriott in Jaipur for the past four and a half years has left the city. He has now become the General Manager of Hotel Westin in Hyderabad. Amicable in nature, the ever smiling Rohit had endeared himself to all the people who mattered in Jaipur. He was present in all the major dos and bashes of the city.  He also made Marriott by the dint of his hardwork and strategic marketing the No.1 Hotel in terms of events in the city. Be it the Okra for its lavish spread out, Jaipur Baking Company for its sweet treats. Lounge 18 for the psychedelic music, ambience and not to forget the ‘spirited’ cocktails. The banquet halls of the property had virtually bagged all the major events in the city.

We will miss you Rohit!

26 YO Shivangi Sarda is the youngest female from Rajasthan to complete Ironman Triathlon 70.3
July 4, 2017

Storytelling through photographs & films at this workshop at JKK
July 4, 2017

Students of Umang meet Salman Khan during his Dabangg 3 Shoot in Jaipur
July 4, 2017

Giving flight to imagination with a Visual Stories workshop at JKK
July 4, 2017