You are here:
Shop 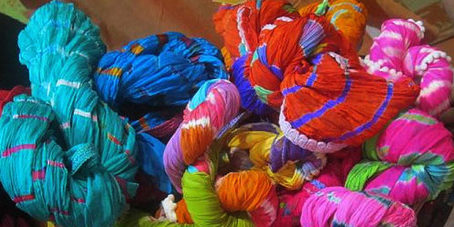 Available in a variety of vibrant colors, prints and designs, “Lehariya”, a tie dyed design in diagonal strips or zig zags, is a big hit during the monsoon. The tradition of lehariya which is said to have been started by the royal family of Jaipur is now not just a favorite among the married women but is adopted by young girls as well.  Lehariya tunics, kurtas, salwars and skirts, being a perfect blend of traditional and modern, are the in thing these days. There goes a folklore which talks about the origin of lehariya from an accidental scrunching of a queen’s dupatta that mixed its colours and formed diagonal stripes.

During the monsoon or saawan, the season of festivals like Teej and Raksha Bandhan, the colours find a flow of their own and the markets of Jaipur are flooded with Lehariya. Be it the shops in the walled city or the designer boutiques in the posh areas of Jaipur, the peppy and dynamic hues of Lehariya abound in plenty.

One of the popular beliefs among the people of Jaipur is that the wavy design of Lehariya resembles the waves of the wind that flow during the monsoon, which is why the lehariya is so much in demand during this season.

Staring from as low as Rs. 100 for a chiffon lehariya duppata, the cost of lehariya can go up to around Rs. 10,000 – 12,000 for a lehariya saree with works of gota – patti, sequins and zardozi.  While the former can be spotted in the streets of the walled city markets like Bapu Bazar and the Hawa Mahal market, high end boutiques in Civil Lines and C-Scheme can cater to your demands for the latter.

A Plethora of Diverse Products at the Winter Show of Hidden Treasures in Jaipur
July 19, 2015

Jaipur: The Ultimate Destination for your Wedding Shopping
July 19, 2015