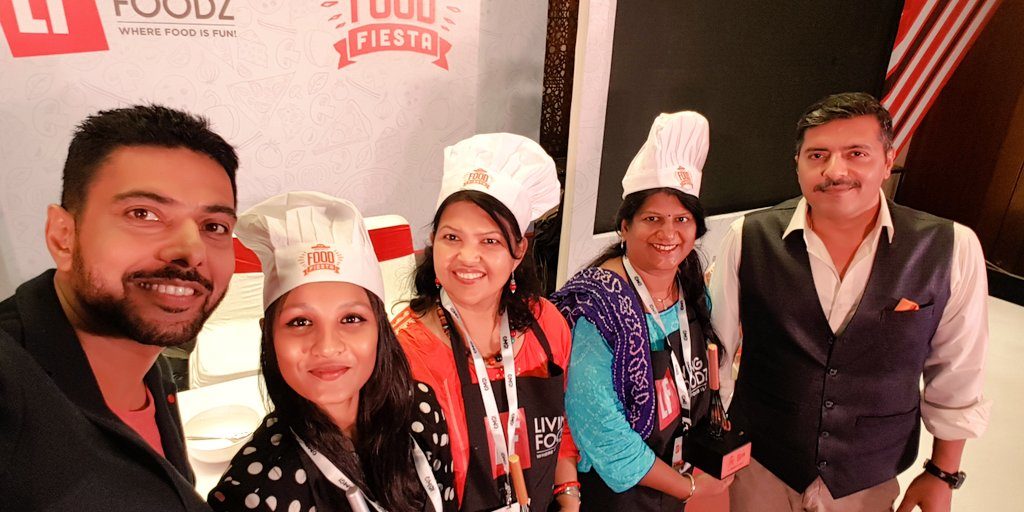 Celebrity chefs Ranveer Brar and Gautam Mehrishi were in Pink City on a hunt for cooking talents for the 2nd edition of Food Fiesta by Living Foodz. While showing some of their culinary skills, the chefs also had an entertaining interactive session with the Jaipurites. Some lucky ones also got a chance to cook with Chef Ranveer and Chef Gautam.

Being a Jaipur lad himself, chef Gautam revealed in the session that he loves the Laal Maas here and the sweets especially from Rawat Misthan Bhandar.

“Look at your mothers and grandmothers as celebrity chefs when they are cooking. They will be your biggest inspiration”, said chef Gautam in such an earnest manner that it won the hearts of the audience. The chef further said that he does not depend on the internet or any gadgets for any recipe. In fact, he tries to amass as much as information as he can from all the ladies and home-makers he meets about how they cook and that remains the biggest source of all his culinary knowledge. Chefs with the competing contestants in Jaipur

Chef Ranveer Brar talked about the emotional connect people had with their copper and brass utensils in earlier times. The non-stick pots and pans which people use these days are “dispassionate”, said Chef Ranveer. On the audience’s popular demand, chef Ranveer revealed that his all time  favourite dish is Valencian Paella. The chef also seems to know his food history. He burst the bubble which most Indians seem to have of considering many food items and dishes as originating from India. Potato and tomato which Indians use so extensively in their cooking were introduced in India only in the 18th and 19th century respectively. To know who made it from Jaipur to to the second edition of Food Fiesta, tune in to the channel Living Foodz or log on to www.livingfoodz.com