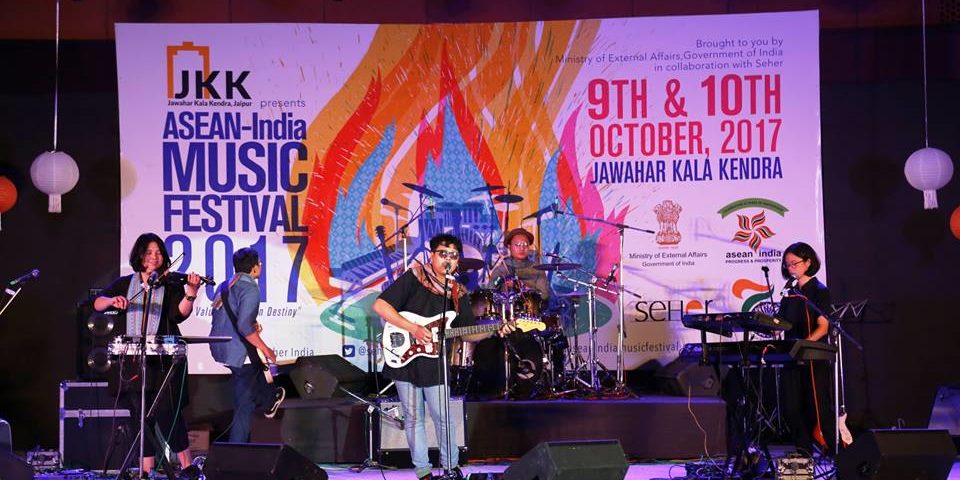 The 5 day musical festival ‘The Music Stage’ kicked off at Jawahar Kala Kendra (JKK) with the ASEAN India Festival. This festival is a cultural celebration of the 25th year anniversary of ASEAN India dialogue relations and has been curated to enrich cultural exchange between ASEAN and India.

The performance began with the popular band from Indonesia, L’alphalpha. They rendered songs of various genres like Indie Rock, Indie Pop and Post Rock. Some of the songs were Future Days, Luka Waktu Manusia, Comets Tail, Tarian, Reverie, Tualang, Terang Tenang, among others. The members of the band were Herald Reynaldo on vocals and guitar, Yudishtira Mahendra on Bass, Citra Winitya on keyboard, Ildo Hasman on drums and Purusha Irma on Violin.

Next came the performance of Indian band from Bangalore  — ‘Lagori’. They belted out Indian classical melodies and inflections with rock music, resulting in an interesting mix that was not only high on energy but also soulful at the same time. In their band were Tejas Shankar on vocals, Geeth Vaz on Guitar, Edward Rasquinha on Acoustic Guitar, Shalini Mohan on Bass Guitar and Vinyl Kumar on drums. In the forthcoming days of ‘The Music Stage’ there will be performances by artistes of Jodhpur RIFF as well as Rajasthani folk. The entry to the event is through tickets which can be obtained from JKK’s office.