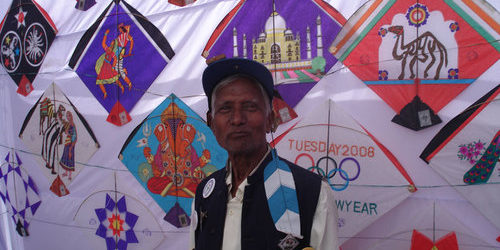 Babu Khan is a name synonymous with kite flying. Even though he passed away in 2014 at the age of 76, he is still remembered among kite enthusiasts all around the world, especially in Jaipur for his magnificent skills in kite making and flying.

Known for flying more than 100 kites on a single string, Babu Khan has won several accolades in not just India but from countries all across the globe like the USA, Taiwan, London, New Zealand, among others, where he participated in a number of kite festivals.

Dressed in a jacket and cap that adorned the badges he had won from all over the world for his incomparable skill of kite flying coupled with his uber friendly demeanour made this septuagenarian kite maestro unmissable on the day of Makar Sankranti. Revered by children and elders like, he was always seen enthusiastically participating in the kite festivals at City Palace and Jal Mahal ki Pal. Babu Khan was in love with kites ever since he was a child. The portrait kites of Gods like Hanuman and Ganesh which he used to make were immensely popular among kite lovers. His kite flying skill also had no match. At one of the kite festivals in Goa, he flew 500 kites on a single strand.

My brothers and I are still continuing our father’s zeal for kite making and flying. We accomplish many orders for making designer and customized kites during the kite season. Babu Khan flying more than 100 kites on a single string

Shedding light on the current trend of using Chinese manjha which harms hundreds of birds every year during Makar Sankranti, Firoj Khan says: “Chinese manjha is not just harmful for birds but also the humankind. It is indeed sad that the spirit of kite flying has been dampened with the use of such products. My father was a vehement believer that kite flying should not harm anyone. That is the true spirit of Patangbazi.” Babu Khan being felicitated at Jal Mahal in 2014

26 YO Shivangi Sarda is the youngest female from Rajasthan to complete Ironman Triathlon 70.3
January 14, 2017

Storytelling through photographs & films at this workshop at JKK
January 14, 2017

Students of Umang meet Salman Khan during his Dabangg 3 Shoot in Jaipur
January 14, 2017

Giving flight to imagination with a Visual Stories workshop at JKK
January 14, 2017