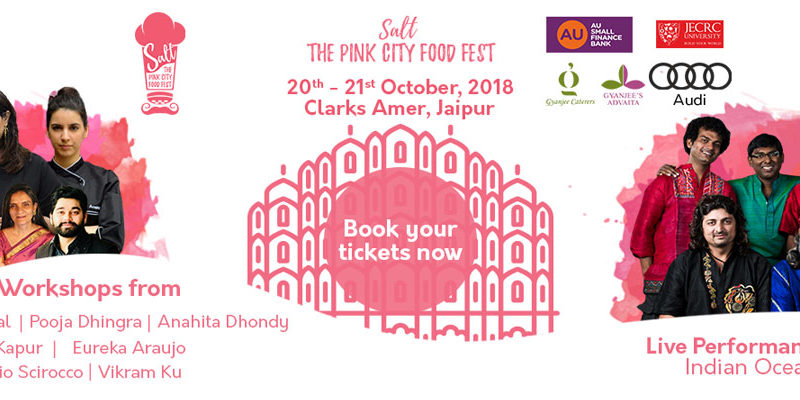 The Pink City is all set to witness a number of diverse culinary workshops from the biggest food gurus in the forthcoming Salt Food Festival on 20 and 21 October. Over the two days, workshops by renowned pastry chef Pooja Dhingra, baker Deeba Rajpal   the young and dynamic Parsi Chef Anahita Dhondy, among others will be held. Giving further information on the workshops, organizer of the Salt Food Fest, Ms. Divolka Jain said that these workshops are themed on interesting topics like food phone photography, Parsi cuisine, Food Styling, Wood Fired Pizza, Cakesicles, Diwali appetizers, among others.  This will introduce the people of Jaipur to global culinary trends and the best of gourmet practices.

The festival will also bring to Jaipur ‘Silent Disco’ for the first time ever. Other attractions of the show include performances by the bands Indian Ocean and Ankur & The Ghalat family.

It is to be recalled that the Salt Food Festival is a 2-day event which will be held on 20 and 21 October in Clarks Amer. The fest will feature alluring workshops by celebrity chefs, pop ups by food giants from around the country and market by home chefs, entertainment nights, among others. The festival has been organized in association with Gyanjee caterers.