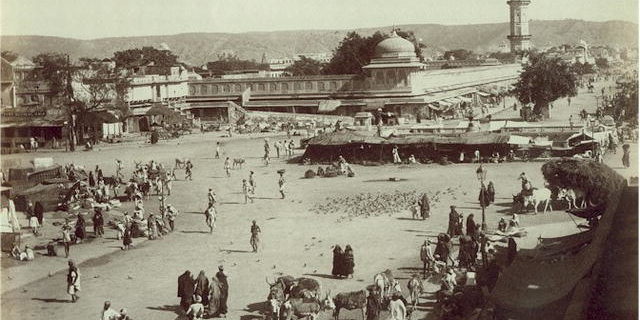 This year has been a goddamned summer of wrath. The mercury hovered around 50. And then there were ‘pre-pre-monsoon’ showers which brought the much-needed relief. And now we’re told that the monsoon have been delayed. Humidity has its own level of discomfort – sometimes even worse than the searing heat. Summer, however, has its attractions too – the mangoes, the ‘jamuns’ and the ‘falsas’. The plum (‘AluBokara’) too has its loyal clientele. Luckily, however, it is raining today.

Talking about ‘jamuns’ my late father used to narrate this chestnut about a fellow officer of his regiment putting two kilos of jamuns in a jar and pouring over them three bottles of Hercules rum. He kept it to ferment in the corner of his courtyard for almost a month. Later it was strained and put in a delicate cut glass decanter. From the decanter it was served in a sherry glass with the chaste advice: it is meant to be sipped not drunk. It was a rare French concoction, those who were served were told, and they believed.

From my childhood I still remember the ‘Dilbahar’ sharbet at the Chhoti Chaupar. As kids it was our favourite. It used to sell like hot cakes from a wooden kiosk. The sharbet was made of milk, with wee bit of ‘rabri’, ‘malaai’ and dry fruits on top. Later they acquired a shop at the back (which is still there). Even later he opened a shop bang opposite the then Mayur Cinema in Nehru Bazar. There is no kiosk or the Nehru Bazar shop today and neither is there the Mayur Cinema. The ‘Dilbahar’ shop in Chhoti Chaupar does sell the ‘sharbet’ even today but it could inspire one to puke – as my cousin Dheerendra Raj Singh (Kiku) would have us believe.

Thanks to perhaps the JLF effect – Jaipur has now emerged as a great centre for book readings and in-conversation sessions. Though the book reading session began in Crossword book-shop, later Mr. Sundeep Bhutoria, the Culturist from Kolkata started ‘the Write Circle’ as well as ‘Kalam’ for both English and Hindi publications. They took off well and are much sought after events, but could be attended only by a limited number of people (its format being such).Mohit Batra of Rajat Book Company joined hands with the Department of Archaeology and Museums – to have book events at the monuments like the Albert Hall, Jantar Mantar and Hawa Mahal. IAS officer Mugda Sinha has also started having book sessions for the IAS Officers Associations. Among the recent entries – the most successful one has been the one initiated by Ajay Singh and yours truly. It has attracted authors like the Pakistan expert Tilak Devasher; Former RAW Chief, A.S. Dulat, historian and scholar, Giles Tillotson. Next week, Lady Kishwar Desai will be coming to Jaipur to talk about her new book on Jallianwala Bagh.

It is just as well that the South Western Command based in Jaipur is celebrating the birth-centenary of late Lt. Gen. Sagat Singh with fanfare. The crucial role he played during the 1971 war in liberation of Dacca (1971) and Goa (1961) is well known. Gen.Sagat deserves higher honors, feels the army, and aptly so. On 13 July, a bust of his will be unveiled in the Army Cantonment.

And as I write this – good news comes that Jaipur Walled City has been declared as a World Heritage Site by UNESCO.

26 YO Shivangi Sarda is the youngest female from Rajasthan to complete Ironman Triathlon 70.3
July 8, 2019

Storytelling through photographs & films at this workshop at JKK
July 8, 2019

Students of Umang meet Salman Khan during his Dabangg 3 Shoot in Jaipur
July 8, 2019

Giving flight to imagination with a Visual Stories workshop at JKK
July 8, 2019